Our Standing Tall: What Do YOU Stand For? principled-leadership initiative is as much about inspiring as it is about educating.  To that end, we created this program with the goal of inspiring businesspeople to become principled leaders in their companies, industries, and communities at large.

While this is very different from the academic approach the college takes to business ethics under the leadership of Dr. Richard McGinity (the Bill Daniels Chair of Business Ethics), we think it is a worthy and important complement.

It’s important to note that the kinds of actions in our initiative do not constitute a comprehensive approach to business ethics.  In his business ethics classes, Dr. McGinity covers a 10-point approach that starts with a formal commitment by directors and senior managers and incorporates rigorous procedures for everything from ethical risk assessment and monitoring to matters of training, reporting, and disciplinary action.

While our project briefly covers some of these issues, our emphasis is on the piece of the equation that is often overlooked… ethical leadership that inspires.

There are two successful examples of this type of leadership spotlighted in our presentation.  Both Jonah Bank and Trihydro Corporation have successfully adopted and integrated The Code of the West into their corporate cultures.  The following bullet points reflect the recommendations, observations, and practices of two leaders (Mark Zaback and Jack Bedessem) that have fully embraced the Code:

·     With 14 offices around the country, Jack Bedessem of Trihydro Corporation was attracted to The Code of the West because the simple principles would be easy to share with employees and customers.  He also thought the principles clearly defined what kind of company the owners/senior managers wanted.

·     Mark Zaback and the other partners of Jonah Bank liked the fact that the longest principle in The Code of the West is only seven words.  Since many of the founding partners of Jonah Bank were originally with larger institutions, they were looking for a simple code of conduct that could be embraced and used on a daily basis by employees and management.

·     These firms have used the following methods to institutionalize and market the use of The Code of the West within their organizations: Business cards and websites; new employee orientation sessions; a review of the 10 principles at the end of company meetings; integrating the Code into all internal and external company presentations; Cowboy Ethics books for employees; strategically placed visual reminders within their facilities, use of the Code in advertising, employee and customer awards, and promotional items.

·     There are some wonderfully written codes of conduct and ethical programs, but, due to their size and complexity, they are often difficult for employees and managers to digest.  Once again, the beauty of The Code of the West is its simplicity and its ability to make you stop and think before acting.

·     Both leaders agree that buy in from the top (ownership and senior-level management) is critical; otherwise a code of conduct isn’t going to be important to your employees.

·     As a leader in your organization, you are constantly being observed by your employees.  Therefore, it is imperative that you display the type of behavior you desire from others.  For this reason, Mark and Jack do everything they can to “walk the talk” when it comes to the principles identified in The Code of the West.

·     Similarly, these leaders instill in their employees the fact that “the customer is watching you.” Therefore, it’s expected that employees will conduct themselves in a manner that is consistent with the Code.  This reinforcement of the Code through employee actions also helps spread the company’s values both within and outside the organization.

·     Mark Zaback states that his employees are constantly evaluating decisions based on the company’s commitment to the Code.  In fact, he said it’s not unusual for an employee to ask, “Is that really what the Code states?”  Mark also can’t ever recall a business situation where at least one of the principles didn’t apply.

·     Both leaders believe employees are more likely to act with integrity if they have opportunities to build their “moral muscles.”  Therefore, Mark and Jack are committed to discussing ethical issues with their workers in order to build a culture of “doing the right thing” within their firms.

·     Living their Code hasn’t always been easy.  Both Jack and Mark shared stories where adhering to the 10 principle in The Code of the West resulted in short-term financial losses for their companies.  However, the good will created by acting with integrity proved to be beneficial in the long run for both organizations.

·     Mark says Jonah Bank employees are empowered to do the right thing for the customer, even when there are times when it may not be what’s best for the bank’s bottom line.  Mark believes happy employees means happy customers and that leads to a successful organization.

·     As a company with offices around the country, some Trihydro employees were originally concerned The Code of the West might not resonate with customers, employees, and suppliers in other regions.  Interestingly, a Trihydro employee addressed the issue by writing an editorial within the company newsletter.  In short, the employee stated that when it comes to Trihydro, it isn’t just The Code of the West, it is The Code of the East, West, North, and South as these are the values that make Trihydro a unique and special place to work and do business.  Since that editorial, the Code has been widely accepted.

·     Mark believes their Code makes it easier and more fun to manage Jonah Bank.  A “culture of doing the right thing” prevails, and employees have adopted favorite principles of their own.  He says it’s proof that simplicity and clarity are possible in regulated, compliance-driven enterprises like banking.

·     Jack believes having a Code makes it easier and faster for his employees to reach the right business decisions.  However, he notes that while values can’t prevent every mistake or imperfect decision, the Code means that when you mess up, you “do what has to be done” to fix the situation. 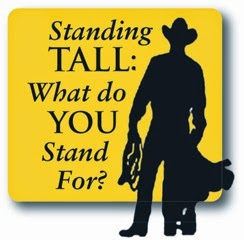 Click on the image to see what our Standing Tall: What Do YOU Stand For? Sessions are all about.

The Code of the West

Live each day with courage.
Take pride in your work.
Always finish what you start.
Do what has to be done.
Be tough, but fair.
When you make a promise, keep it.
Ride for the brand.
Talk less and say more.
Remember that some things aren't for sale.
Know where to draw the line.
From the book Cowboy Ethics © 2004 Used by Permission

Past Standing Tall Presentations and Overviews